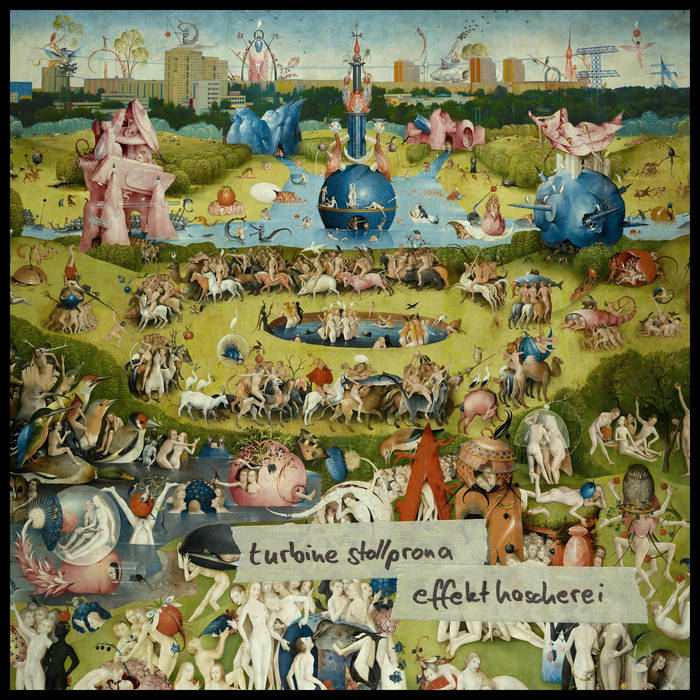 Effekthascherei: /ɛfɛkthaʃəˈrai/ noun; a German word for cheap showmanship and gimmickry.
Can be also interpreted as being over-powered by
the consumption of hashish.

Things are rarely as simple as they appear, currents can change at a whim, and beautiful facades can be scraped away to reveal something foul. It is this complexity the band seeks to replicate and condense into musical allegory. Turbine Stollprona glide through genres, mainly post-rock, krautrock, and prog-rock; but don’t trivialize them. Variety is one thing, cheap imitation, or Effekthascherei, another. The former the band employs, the latter they berate.

The album „Effekthascherei“ was recorded in the course of 2015/2016 in Berlin as a true DIY project by the band. The mixing was done by Ron Pollard (Tangled Thoughts of Leaving) at Studio Sleepwalker's Dread in Perth. Mastering by Johannes Feige at WoAnderland Studio in Berlin.

Turbine Stollprona was founded by school friends from the suburbs of East Berlin. They found inspiration and camaraderie attending underground concerts underage round the turn of the millennium. This time witnessed an underground music scene that filled the cultural vacuum in the supposedly reunited capital. The band formed some years later in 2010 and released two records since then. ... more

Bandcamp Daily  your guide to the world of Bandcamp

Serena Cherry debuts her black metal project, plus a Pick from the Crypt block from Svalbard